1. Earlier methods for implementing redundancy for the DHCP Service

The negative consequences of this method are that if one of the DHCP servers fail, you will have deficit in the number of available IP addresses on your network, until the failed server has been brought back online again, or been replaced with another DHCP server. It is possible to circumvent this problem, but the point is there is no automatic replication of lease information between the two servers, so the split scopes solution is not optimal.

High Availability is provided by configuring a failover cluster consisting of two or more nodes, where the DHCP database will reside on shared storage. So if one of the nodes fail, the DHCP database will automatically be moved to another node, in a process called failover. This method adds complexity in the form of requirement for the failover clustering feature and shared storage. Also, if you want redundancy on the shared storage, you will have to implement that separately.

You can of course still utilize all of these methods in Server 2012 R2 if you want.

As mentioned earlier, this feature was introduced in Windows Server 2012. You can create redundancy on scope level by configuring two DHCP servers to provide leases from the same pool of addresses. The two servers then replicate lease information between them, which enables one server to assume responsibility for providing leases to all clients on the subnet when the other server is unavailable. This ensures a higher degree of fault tolerance than the aforementioned methods.

The limitations of DHCP failover is that it only supports IPv4 scopes, and each scope can be set up for failover between maximum two DHCP servers only. Not supporting IPv6 is not such of a big limitation, since more often than not, IPv6 DHCP servers are used to service only the DHCP options configuration.

DHCP failover can be implemented in two different configurations;

This is the default configuration, leases are issued from both servers equally. This configuration does not only ensure high availability, but it also, as the name suggests, provides load balancing for a particular scope. Keep in mind, in certain scenarios, latency might occur when clients try to acquire or renew an IP address, in this failover mode. Such as in multi-site deployment topologies, where clients might be in Site A, while DHCP server 1 and 2, might be in Site B and Site C respectively.

3.1 You will have to install the DHCP Server role on the servers you are going to implement DHCP failover on. Which is a straightforward process in Server 2012 R2, since no configuration is made during the installation of the role. You only need to authorize the server, after installing the DHCP server role, which is also performed in Server Manager.

3.2 Since DHCP failover is implemented at scope level, you will have to create and configure scopes first. Only on one server of course. 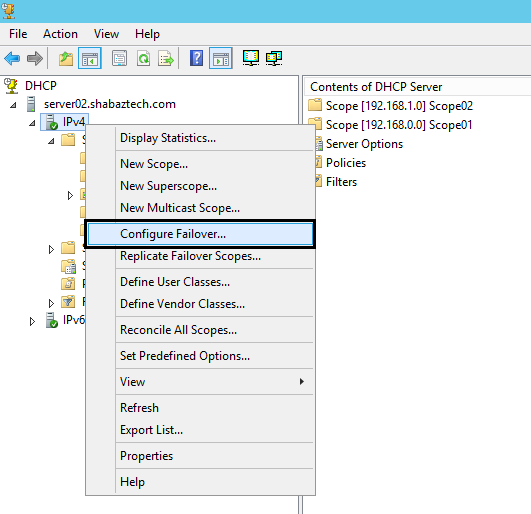 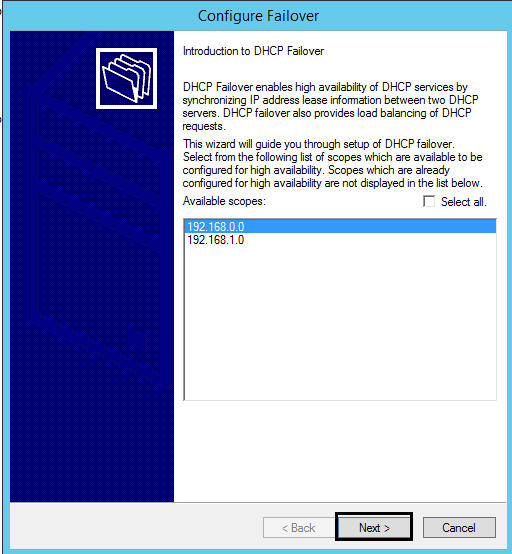 3.5 You can add partner server by typing the host name or IP address of it, by selecting a server you already have a failover relationship with, or you can click on Add Server to select from a list of authorized DHCP Servers. Which is what I did. 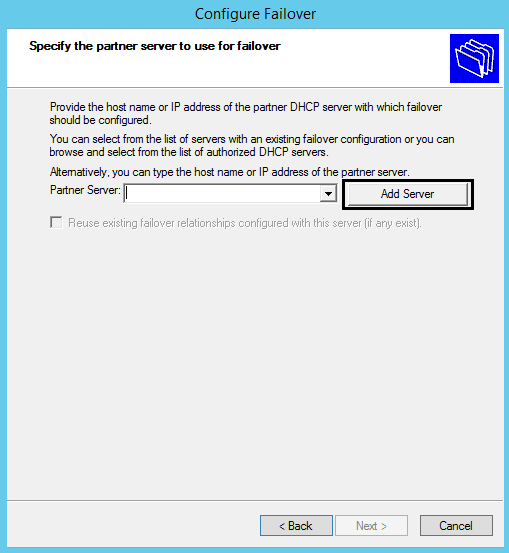 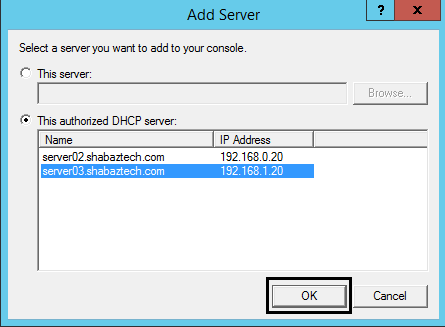 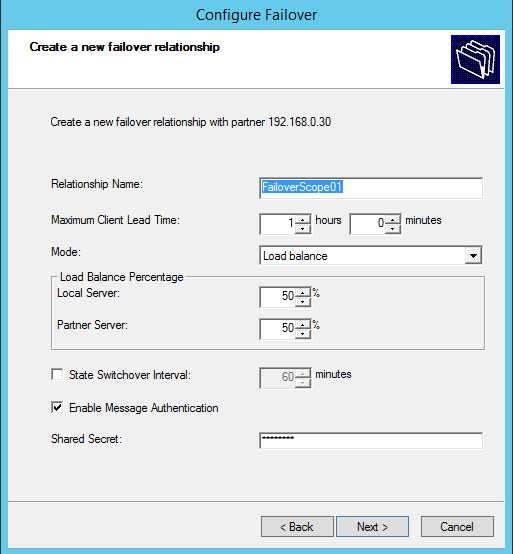 The configuration options here are as follows;

Maximum Client Lead Time
Defines the maximum amount of time that one server can extend a DHCP lease for a client beyond the time known by the failover server. This time also determines how long the active server waits with its partner offline before assuming total control of the DHCP scope.

Load-balance Percentage
The percentage of DHCP client requests that will be serviced by each DHCP server, in the active/active relationship.

State Switchover Interval
The active DHCP server will automatically place its partner into a partner-down state when it can’t communicate with it for the specified amount of time. If this setting is disabled, an administrator must manually tell DHCP Failover that a server is in a partner-down state. Either through the GUI (DHCP management console) or Powershell. You can only change to partner down state, if the communication has been interrupted between the two servers. If the DHCP Server service notices that the communication is in fact intact, you will not be able to change to partner down state.

Enable Message Authentication
Enables authentication of the failover replication traffic between partners. What this basically does is to secure communications between failover partners.

Shared Secret
If you have selected the Enable Message Authentication check box, then you will need to specify a password here for authentication of traffic.

If you select the hot-standby mode, you can select the Role of Partner Server, and what percentage of the IP addresses of the scope will be reserved for standby server. The hot standby server will use these addresses to service new clients after the primary server goes down, during the time interval before the standby server assumes control over the entire IP address range of a scope. Remember, in the hot-standby mode, both servers can obviously not be active, so one of them has to be assigned the standby role.

3.8 Make your choices, then click Next, various tasks will be performed. Click Close, to complete the wizard. 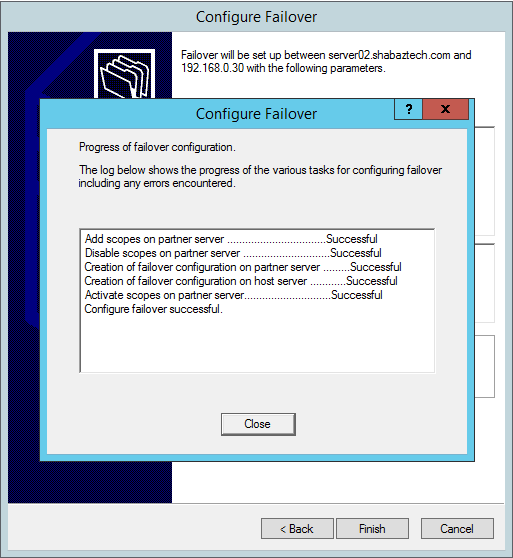 3.9 You can check the scope on both servers to see that the scope information is indeed being replicated.

4.1 Remove the failover relationship from a scope

4.1.1 To deconfigure (remove) the failover relationship from a scope, right-click the scope and select Deconfigure failover. Then click OK. 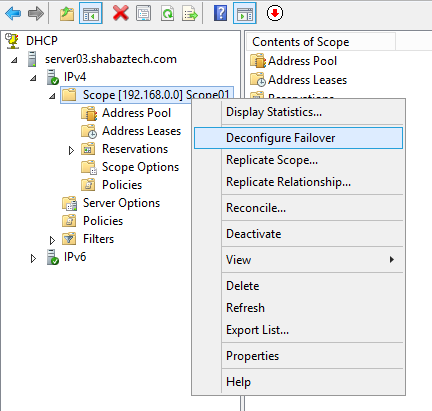 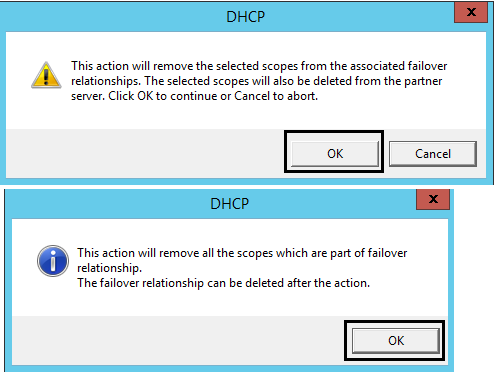 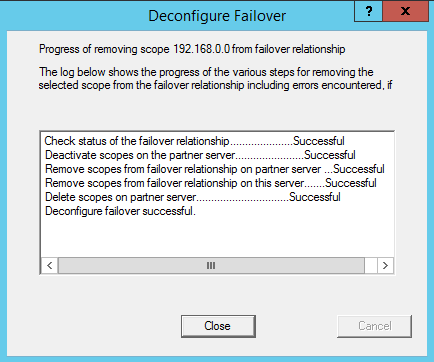 4.1.3 It does not matter on which server you first created the scope, the server from where you run the Deconfigure Failover wizard, will keep the scope, while it will be deleted on the partner server, as noted in the picture above.

4.2 Viewing the failover configuration for a scope 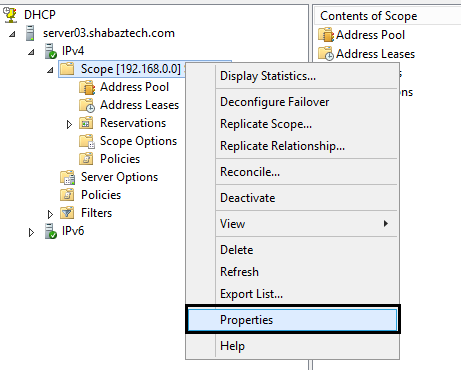 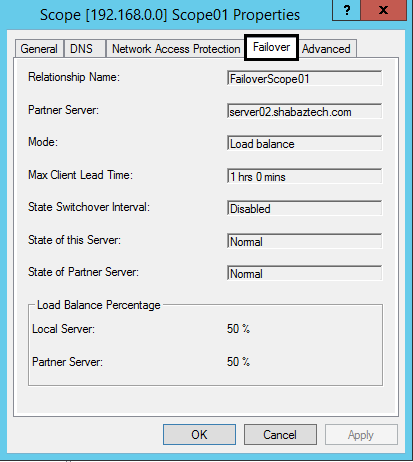 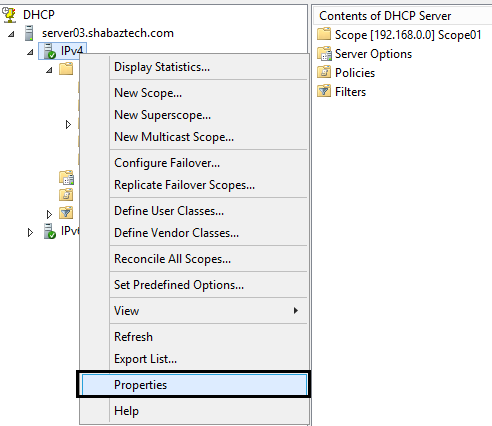 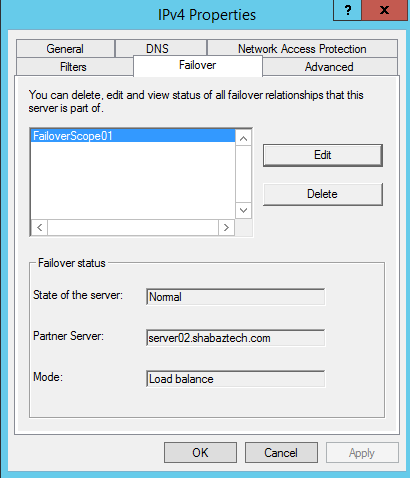 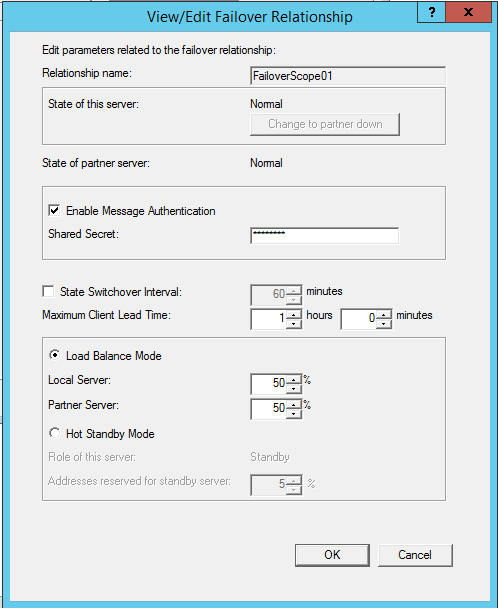 Notice how the Change to partner down button is greyed out, since the communication between the two servers in the failover relationship is functioning just fine.

4.3.3 On the same tab, you can also view the Failover Status

4.3.4 If you choose to delete a failover relationship, redundancy for all scopes belonging to that relationship will also be removed 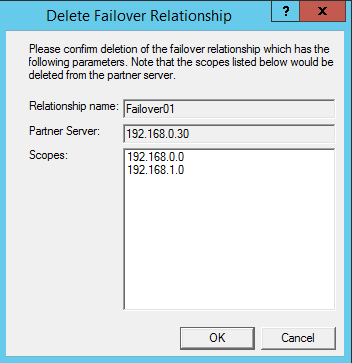 4.4.1 To force the replication of a single scope, right-click the scope and select Replicate Scope 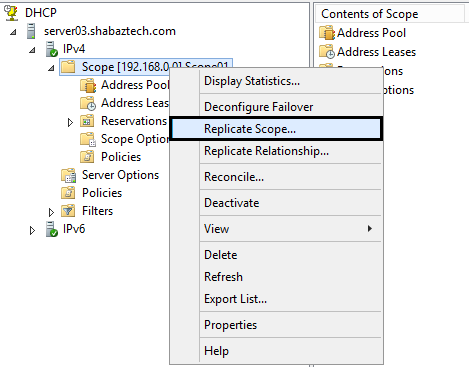 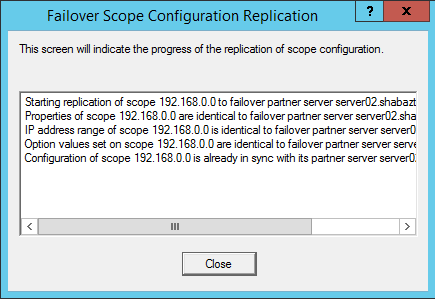 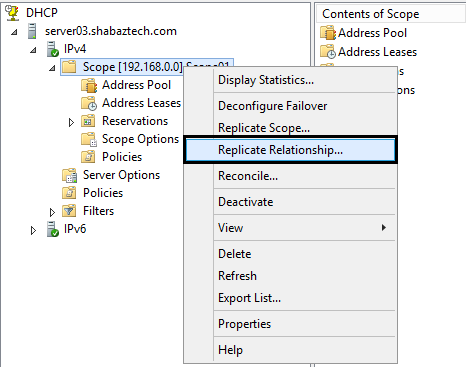 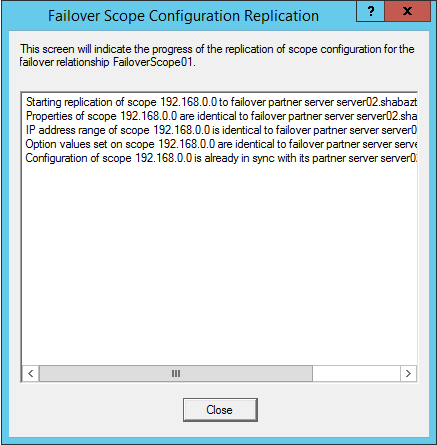 4.4.2 To force the replication of all scopes in all failover relationships to the partner servers for those relationships, right-click the  IPv4 node for the server and select Replicate Failover Scopes 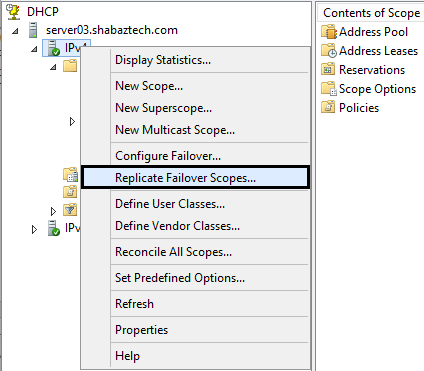 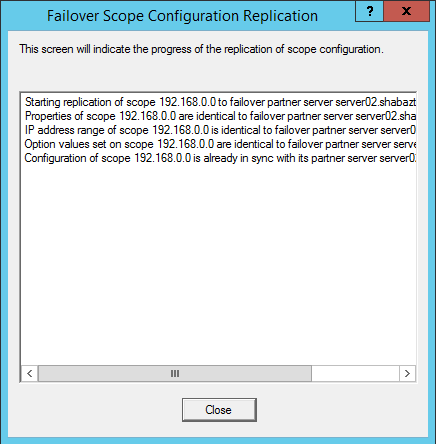 The following cmdlets are used to implement and manage DHCP Failover through PowerShell.

You can read more about them on technet.