At their core XenApp servers perform the same function as Microsoft Remote Desktop Session Host servers, in other words, they host applications and desktops, which users can connect to. But XenApp is more secure, configurable, faster and expands upon the functionality offered by Microsoft RDS. In this blog post we will briefly look at Architectural components of XenApp 6.5, to get a basic understanding of what function the different components of a Citrix XenApp 6.5 infrastructure serve. 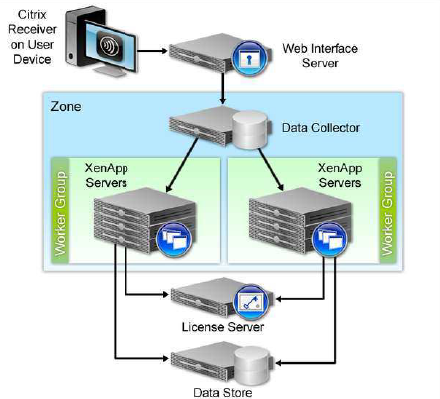 A farm is a group of XenApp servers that can be managed as a single logical entity, can use a single data store database, and can balance the load resulting from requests for published resources in the farm. Published resources are of course applications and desktops, which users can connect to. XenApp 6.5 does not support mixed farms. Which means that a XenApp 6.5 farm must exist of only XenApp 6.5 servers.

You can think of zones as Active Directory sites, if you are familiar with those. Basically you create a zone for each location or site of your enterprise. If you have a subnet in Chicago and one in New York. You would create a zone for each location. But Citrix generally recommends to only use a single zone. Multiple zones are only recommended in large farms that span WANs

These are the servers that host applications and desktops, which your users can connect to. XenApp servers deliver online and offline (hosted and streamed) applications on-demand. They can be configured with one of two server roles, worker (session-host mode only) or controller. Worker servers can only host sessions, while controllers can host sessions and act as Data Collectors.

A Data Collector is a server, which has been configured with the Controller and Session-host mode role. This means that the Data Collector can host sessions, and act as a controller. Data Collectors keep track of dynamic data in a zone, such as for example session and load information. Which means they among other things, are responsible for load balancing of XenApp servers in a farm.

The database stores the static information of a XenApp farm. Such as configuration data for the farm, published applications, administrators and printers. The datastore database can be hosted on a SQL Server Express installation running on one of the XenApp servers in a farm. But its recommended to host it on a dedicated SQL Server or Oracle server in medium to large farms.

You can group servers in Worker Groups, and then manage policies and applications on multiple servers at the same time. You can add servers to Worker Groups manually, or you can base Worker Groups on Active Directory Organizational Units. Which means that all servers in the specified OU, will automatically be members of a specific Worker Group.

Whenever a user connects to a XenApp server, he needs a license. That license is provided by the License Server. When a user connects to a XenApp server, that server places a request of a license on behalf of the connecting user. Citrix XenApp uses concurrent user licenses, which are licenses that are not tied to specific users. The License is rather tied to a specific user/device combination, and its valid for the duration of the session. If the session ends, the license is returned to the license pool. If a user connects from two different devices, he will consume two licenses.

The Citrix Web Interface provides users access to XenApp applications and content. Users can access their resources through a standard Web browser or through the Citrix Receiver. The XML service on the XML brokers (which must be XenApp servers running the controller role), communicates with the web interface to determine which resources users have access to.

Citrix Receiver (previously known as Citrix Plug-In and ICA Client) is the software client that users use to access published applications and desktops on XenApp farms and servers. Citrix Receiver is available for almost any device and platform, such as for example Android, iOS and Windows.