Server With A GUI will not be covered here, as all Windows Administrators should be well acquainted with that installation option.

In Server 2012 R2, Server Core is actually the default installation option, instead of the Server With A GUI option. Server Core is as we all know a stripped down version of Server 2012 R2. There is no Start menu, no desktop Explorer shell, no Microsoft Management Console (MMC), and virtually no graphical applications. All you see when you start the computer is a single window with a command prompt.

All management of the server has to either be done remotely – through Server Manager, Remote Server Administration Tools (RSAT) or Powershell, or locally through the command prompt or Powershell. The benefits of Server Core are following;

⋅Less servicing overhead, as it requires fewer software updates. Meaning there will be fewer restarts, and thus less downtime.

⋅More of the system hardware is devoted to running essential services, as some of the most memory-intensive and processor-intensive elements of Server 2012 R2 are not present.

The Minimal Server Interface is a compromise between Server Core and Server With A GUI, you get to keep some of the GUI elements, while (some of) the most hardware-intensive elements are removed.

What you are left with are Server Manager, MMC, Device Manager and Windows PowerShell Integrated Scripting Environment (ISE).

2.1.1 Launch the Remove Roles and Features Wizard
2.1.2 On the Features to remove page, scroll down to User Interfaces and Infrastructure, where you will have two choices you can remove 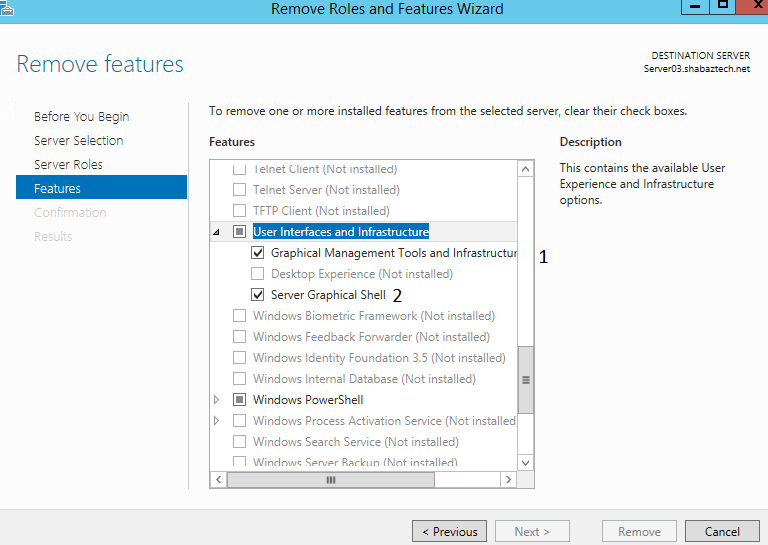 Server Graphical Shell
This feature includes components that provide the full GUI. If you remove just this feature you will be left with the Minimal Server Interface. The Powershell name for this feature is Server-Gui-Shell.

2.1.3 Remove the check box for Server Graphical Shell, then click Next 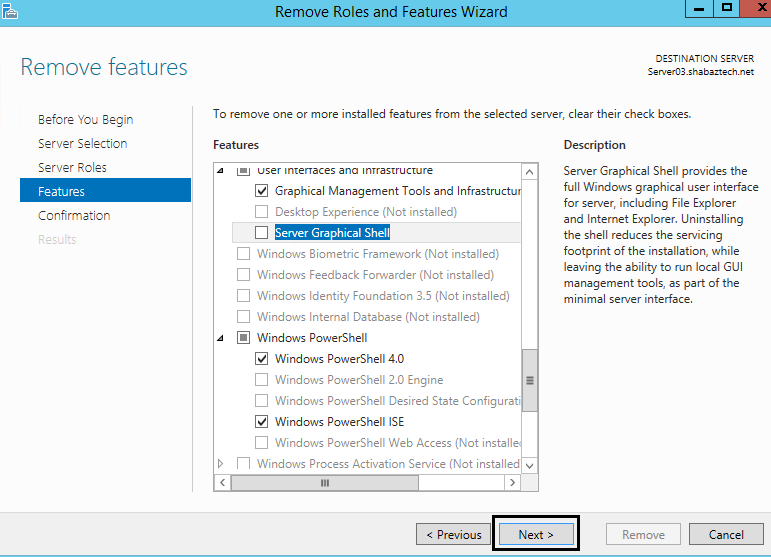 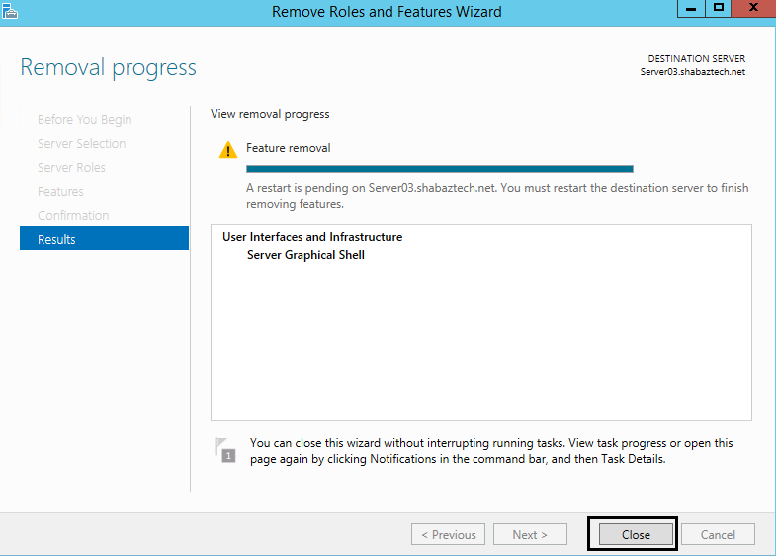 2.1.6 Log on to the server again, and you will be presented with the command prompt. But you can launch Server Manager and MMC by using the following two commands respectively, servermanager and mmc. 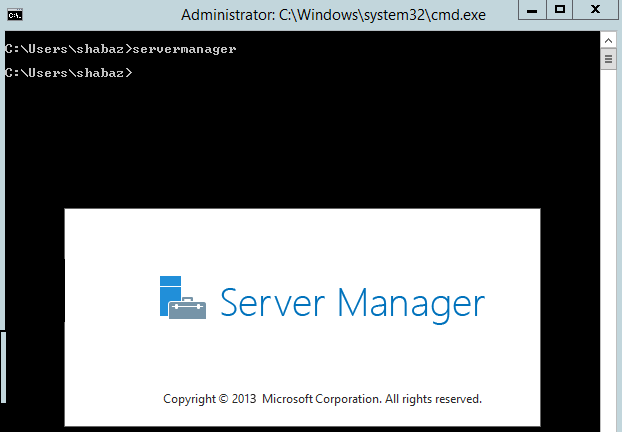 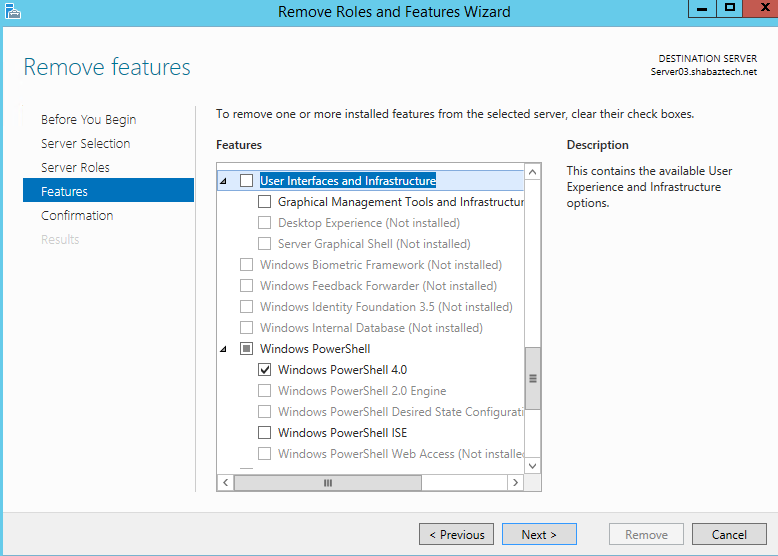 2.1.8 Once you restart the server (by running shutdown -r -t 0 for example), and log on again, you will notice that it is no longer possible to start Server Manager or MMC, because you have now converted the server to the Server Core edition.

We will convert from Server Core to Server With A GUI, using the Powershell.

2.2.2 Run the following command to convert the server from Server Core to Server With A GUI

The path C:\windows\winsxs for the –Source parameter in the preceding command specifies that binaries for the features can be found in the side-by-side store (%windir%\winsxs folder)

Alternatively, you could allow the necessary feature binaries to be downloaded and installed from Windows Update by omitting the –Source parameter as follows,

Note that if you previously converted a Server With A GUI installation to a Server Core installation and did not remove the binaries for these features, the binaries remain staged in the WinSxS folder and therefore do not need to be downloaded from Windows Update. Which holds true for this case.

2.2.3 If you just wanted to convert from Server Core to Minimal Server Interface, you would have used this cmdlet

Which means that when you install these features on such a setup, you must specify an alternate source for their binaries. It can be a mounted .wim file of a Windows Server 2012 or later installation of the same service pack level. Alternatively you can allow the feature binaries to be downloaded and installed from Windows Update, or you can define the source in a GPO.

The GPO setting is found in the following location 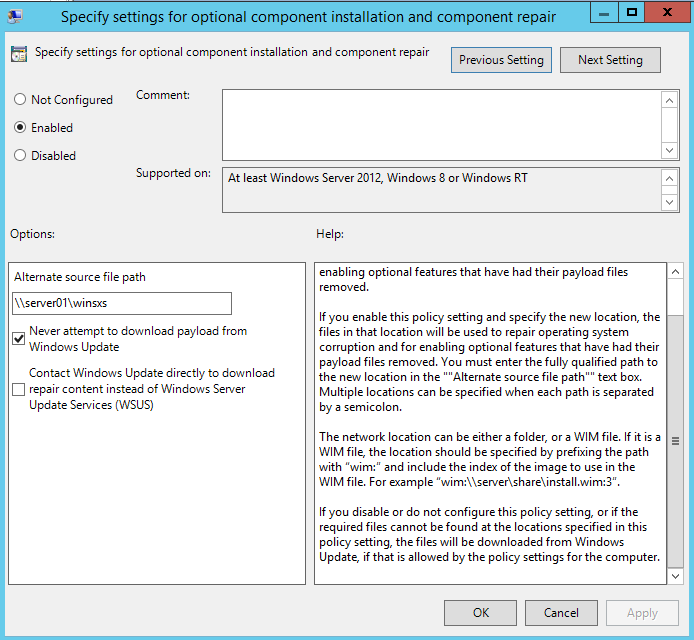 Since I am defining a UNC path here, I will have to give the computer account of the machine where I am installing the binaries, permission to access the files in the shared folder. Since the Trusted Installer process runs within the machine account’s context.

The Features On Demand capability in Windows Server 2012 and later, enables administrators to remove packages from the WinSxS folder, which could not be done on installations of previous versions of Windows. This can reduce the disk footprint of the installation and enhance the security, as you remove binaries for features that will not be needed.

If you want to convert a Server With A GUI installation to a Server Core installation, and remove the binaries for the Server-Gui-Mgmt-Infra and Server-Gui-Shell features, you can run the following Powershell command,