Microsoft System Center 2012 R2 Configuration Manager is an enterprise management tool that provides a complete solution for Windows client and server management, including delivery of new software packages, virtual applications, software updates and operating systems. SCCM 2012 R2 also has, to a certain extent, the capability to perform mobile device management and management of devices running non-windows operating systems. In this blog post we will briefly look at the architectural components of SCCM 2012 R2, to get a basic understanding of what function the different components of a SCCM 2012 R2 infrastructure serve.

A hierarchy of sites can be described by one of three basic configurations, 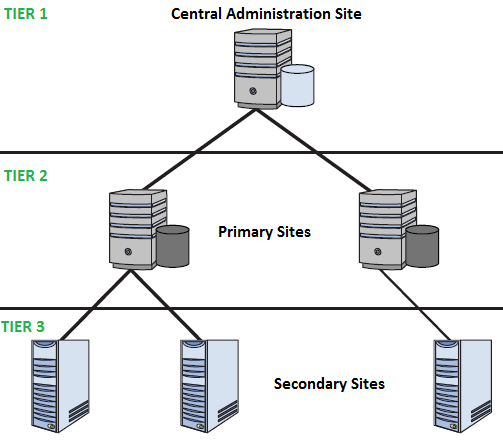 CAS is the recommended location for all administration and reporting for the hierarchy, if you choose to deploy a hierarchy with a CAS. Central Administration sites are used in scenarios where you need more than one Primary Site, such as when you need to manage more than 100 000 clients. The maximum number of clients supported for an entire Configuration Manager 2012 hierarchy is 400 000. The CAS supports only primary sites as child sites. It has limited site roles available, has no clients assigned, and doesn’t process client data. The CAS requires SQL Server for data that is gathered from the hierarchy.

Secondary sites must be direct child sites below a primary site, but can be configured to send content to other secondary sites. They also receive a subset of the Configuration Manager database. Clients cannot be assigned directly to secondary sites.

Because administrative consoles can connect only to a central administration or primary site, secondary sites are typically used in locations that do not have administrators, or in locations where you need clients to scan for software updates compliance without needing to talk to a primary site server. The latter can be achieved by installing the software update point role on a secondary site server.

Site System
Supports both required and optional site system roles. Any server (or share) with an assigned role automatically receives this role.

SMS Provider
A WMI provider operating as an interface between the Configuration Manager console and the site database. Secondary sites do not install SMS providers.

Fallback Status Point
Provides an alternative location for clients to send up status messages during installation when they cannot communicate with their management point.

Management Point
Facilitates communication between a client and site server by storing and providing policy and content location information to the client, and receiving data from the client such as status messages and inventory. One Management Point can support up to 25 000 clients.